History of the Badge 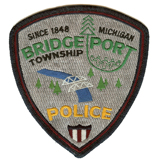 Bridgeport, known as "Bend in the Cass" or "Cass Bend", got its name from being the first bridge built on the main trail from Flint, MI. This bridge crossed over the Cass River where the current Dixie Highway is located. The bridge was over a low gentle sloping bank which travelers could easily get in and out of their water crafts. This created a port, hence the name Bridgeport.

Bridgeport has approximately 10,700 residents and was established in 1836. Bridgeport is Michigan's oldest Charter Township, becoming one on April 4, 1848.

The green Bridgeport, along with the tree and community holding hands in the patch, is Bridgeport Township's current official seal. It represents ...a community living and growing together. The silver background also represents one of the Township's official colors, which is currently used for the Township vehicles.

The bridge in the patch represents the State Street Bridge, which is Bridgeport's oldest standing trestle bridge, completed in 1906 and is located at the north end of Lyle Park. The bridge was built by the Joliet Bridge Company, Joliet, IL, and cost $7995, which was paid for in 1913. In 2010 this bridge was refurbished and re-opened to Lyle Park foot traffic.

The red, white and blue shield in the patch represents Bridgeport Township Police Department, protecting the community through professionalism, integrity and excellence in service.